Oh baby do I have news for you. It’s week four of the One Room Challenge and the kitchen has received a major upgrade and is now the proud owner of  BRAND. NEW. COUNTERTOPSSSS!!!!! And, bonus: a backlash!

The new countertops are Carrara Quartz — i.e. not real Carrara, but they’ll withstand scratches much better and were just a fraction of the price of the real thing.

We also have a new, much deeper sink with more modern appeal than the previous sink. 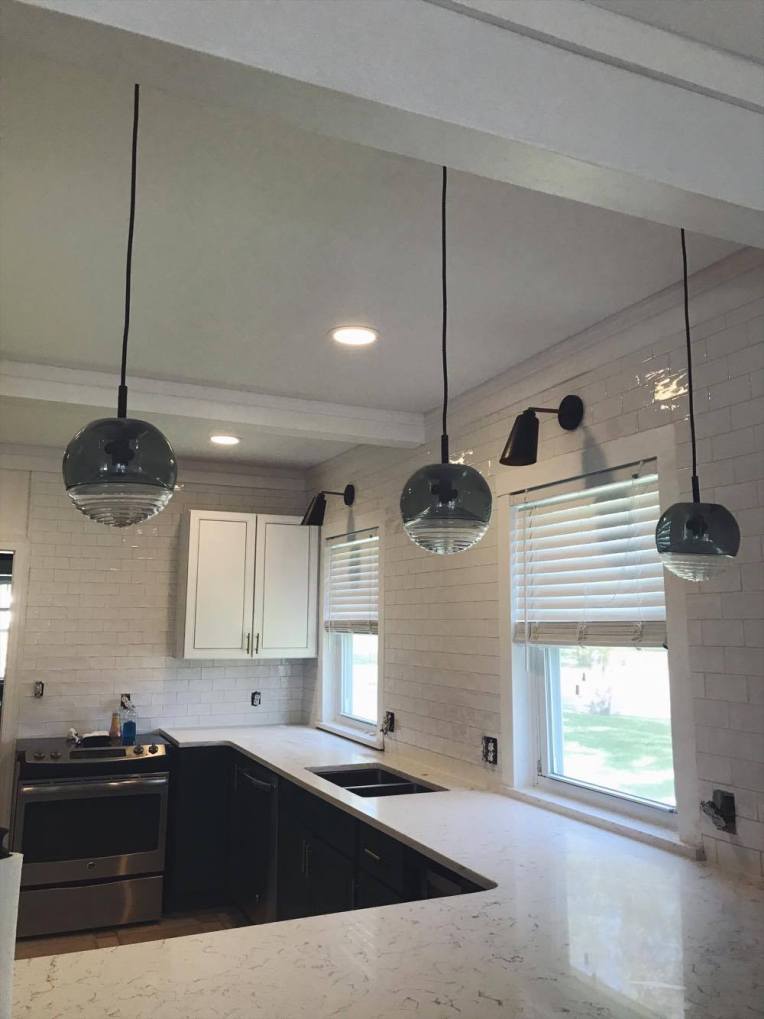 The adjacent living room has also received an upgrade, in the form of new floors, which is a big deal for the kitchen because this means we can actually use the bar. The floors are actually laminate, installed by Home Depot, but they turned out really well and unless you’re touching them, no one is really the wiser.

This weekend, we plan to tackle the floor, The tile is fine, but the color clashes big-time with the green cabinets and newly white walls, backsplash, and counters. So stay tuned for next week! Lots more to come.

It’s week three of the One Room Challenge and I have four words for you: Let. There. Be. Light!!! (*Oprah voice*).

Lighting can really make or break a space and, unfortunately, great lighting tends to be really pricey. Fortunately, I sourced the lights for the kitchen in some pretty unlikely places. One of the sconces I found at a local thrift store. It was buried under a mountain of lightbulbs and cords (and insulation, some of which wound up under my skin but who cares if it means I get a cheap sconce), and cost $12. Black with gold accents — the perfect thing. Now I needed to find its mate. That took me a full month of diligently searching Google (the sconce had no brand name) until I finally found the mate, and purchased it for full price. 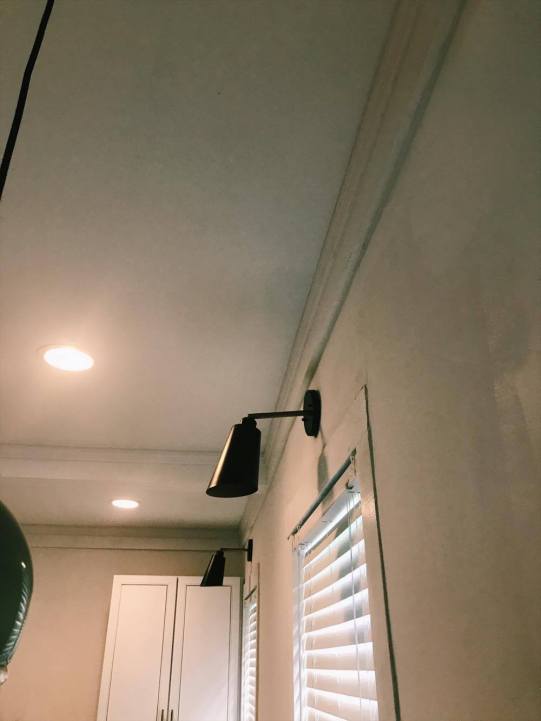 The sconces don’t entirely light the space, so my uncle installed can lights to fill the center of the room.

They are super subtle, which I love, and don’t compete with the pendant lights which are one of my favorite parts of the room so far. These are Tom Dixon, smoked glass pendants and I found them on….eBay! I got three for the price of one, basically, and they add so much sophistication to the space. 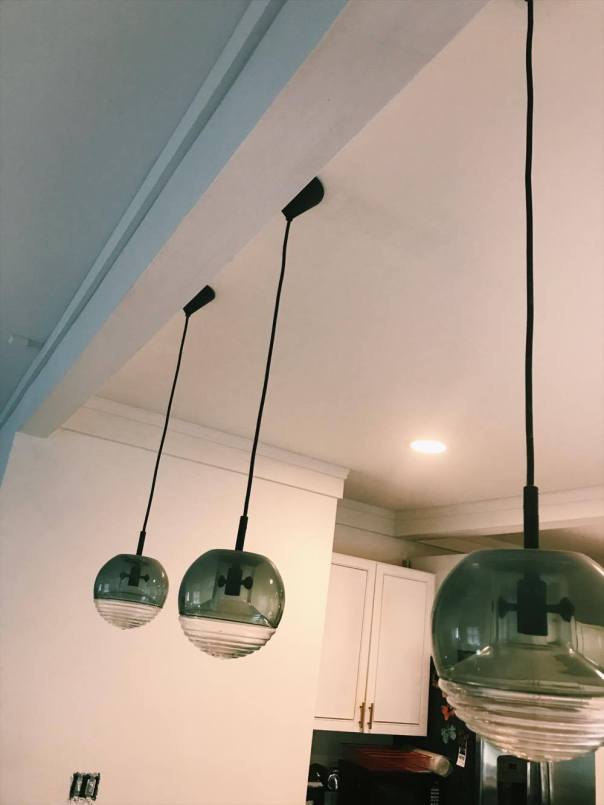 There’s still lots of work to be done. The floors hurt my eyes, for one thing, and we need a backsplash for added texture (that comes next week). Stay tuned. 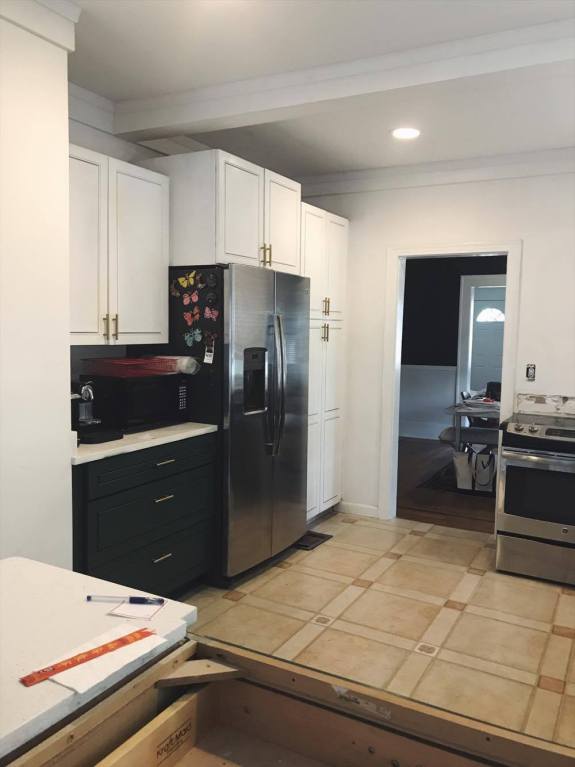 When it comes to decorating or renovating a home, everything is expensive. And I mean everything (why are trash cans over $100?). Fortunately, I am a vintage-obsessed, jump-into-a-pile-of-junk thrift store devotee, who isn’t afraid to get her hands dirty.

In recent months, I’ve been scouring sales and shops for lighting — lamps, chandys, sconces, you name it. Lighting is incredibly expensive. One of my favorite brands, Visual Comfort, makes some of the best lamps out there — but as I am currently remodeling the kitchen, I’d rather put money toward new counters than new lamps.

The most difficult thing about vintage shopping for lighting is that it’s rare to find a pair of anything. And I really wanted a great pair of lamps to flank the bed in the master, as well as a pair of sconces for the kitchen.

During a recent thrift store trip, I stumbled upon an amazing Frederick Cooper pineapple lamp. Just one, sadly, but it’s pretty great. I’m selling her on Chairish, if you’re interested. 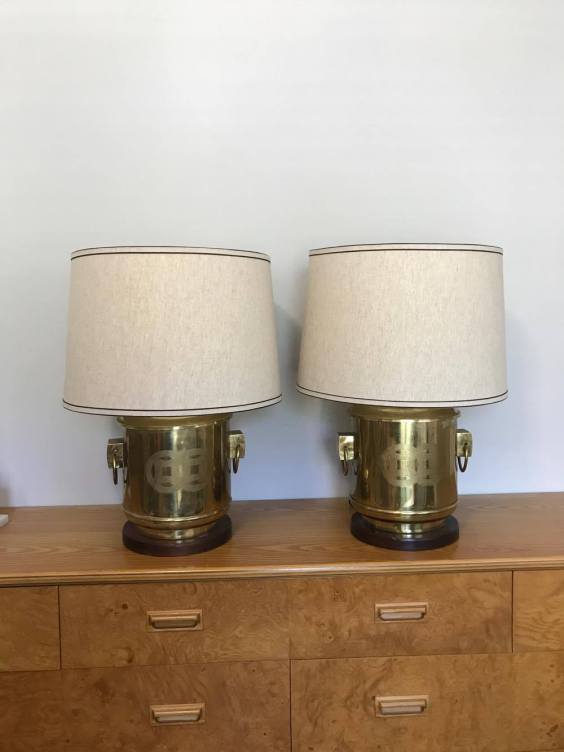 Another recent find: This fun, swirly, Memphis-style lamp. This one was $7.

On the hunt for vintage chandeliers this weekend! Check back soon for more finds 🙂

Welcome to Week 2 of the One Room Challenge, which I am now referring to as: Hell Island. That’s because my kitchen island is my worst enemy and I hate it.

To re-cap, we had a slew of things to work on, including moving the stove from one side of the room to the other. We did it, with huge help from my uncle (he actually did it entirely himself), swapping the stove with the cabinets from the other side of the room. It was a perfect fit!….but now we have a new challenge: there’s a gaping hole in the center of the kitchen island because, you know, there used to be a stove there.

I toyed with having a piece of butcher block custom-made for the hole, for a built-in cutting board, but butcher block is so thick that it wouldn’t have been flush with the counters. So, I’m getting new counters. Ugh.  More on that in the coming weeks (fingers crossed).

All of the cabinets have now been painted, white on top (Behr, Ultra Pure White) and a deep forest green on the bottom (also Behr, called Secluded Woods). We also changed out all the hardware, going from ’90s silver drawer pulls to sleek and sexy brass pulls, sourced from Amazon (it was like $25 for all the handles).

Oh! The biggest change: the ceiling! My uncle took out all that godforsaken wood (which was good because he found actual sticks under there and a brick fell out and almost hit him on the head) and replaced it with a white ceiling. We added probably two feet to the room and it feels even more expansive thanks to the color. Once he removed the wood tiles, he got to the bones of the house, adding in sheetrock and installing can lights (and, you’ll notice, a spot where I can eventually put sconces over the windows):

Next, he finished the ceiling and added a gorgeous beam. (My uncle, FYI, is not even a contractor, but he is an electrician and he is just insanely handy with like everything).

Stay tuned for next week, which will include lighting details and a Hell Island update.

I’ve said before that some of the best estate sales are those at the homes of artists. I was lucky enough to stumble upon another such sale just last week, and came home with several original pieces.

Estate sales are great resources for art because the works have typically been taken good care of (rather than a thrift store, where pieces are often damaged). I gravitate toward pieces with really rich, bold colors, like the below landscape, but sometimes the subject matter gets me (as is the case of the Spanish bullfighter). It’s difficult to tell, but the landscape is huge (36 inches by 37 inches) and it cost me just $50. Each other piece was $25 so I got all three for $100. 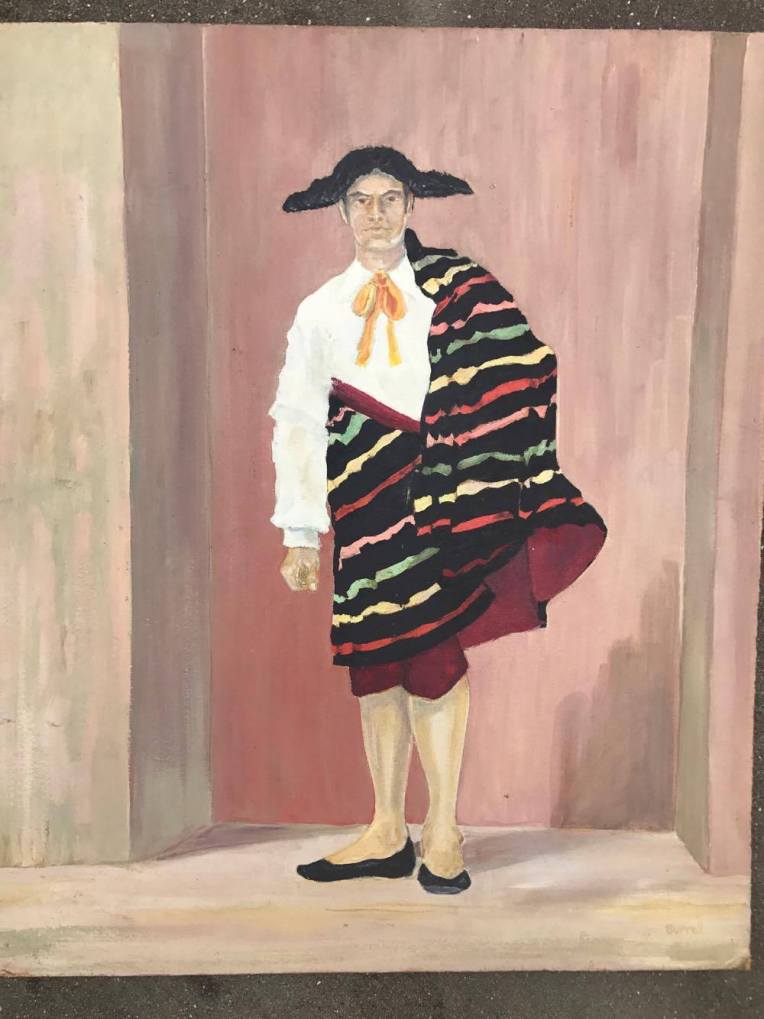 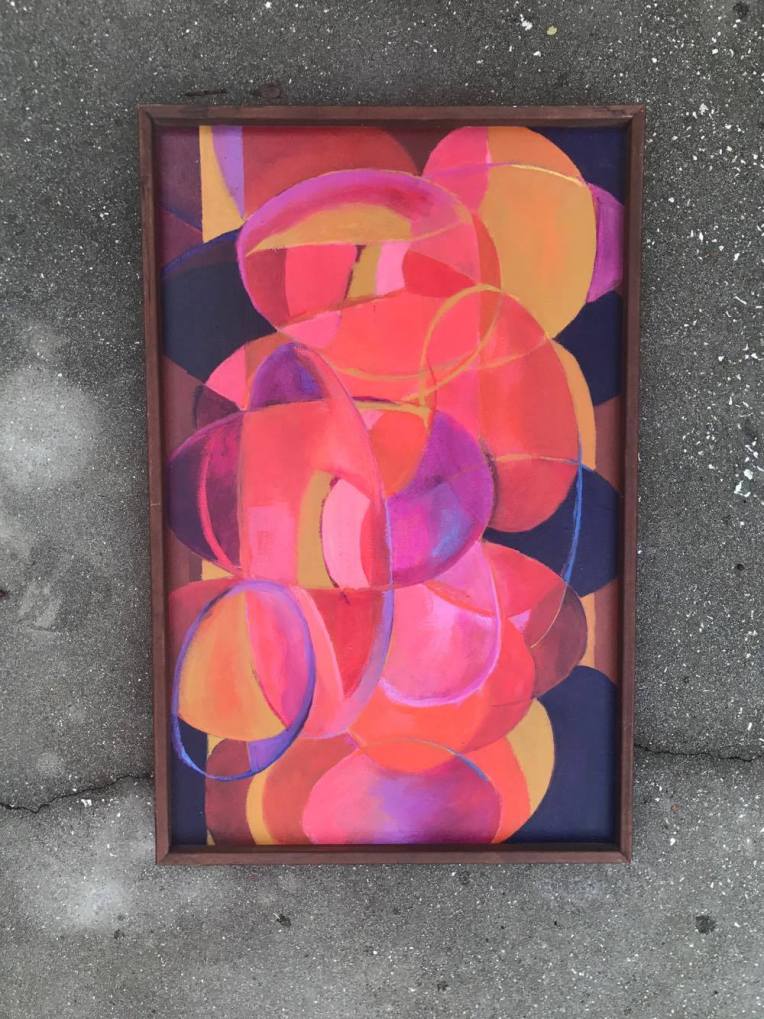 I went ahead and styled the above pink geometric piece. I wanted to bring out those rich purples in the foreground so I styled it alongside some other fun recent finds.

The burlwood chest is vintage Henredon ($100 from a thrift store), the two pottery vases are from Goodwill ($7), and the colorful man is an antique store find (I think $10). The two brutalist-esque men made of railroad nails are also from an estate sale ($7). So everything in this photo, including the furniture, cost around less than $200.

Seeing as how I recently bought a new home (a 100-year-old, Mediterranean style bungalow) and have been ramping up renovations, I figured I’d hold myself to a deadline for the interior design of at least one room. Enter the One Room Challenge, which I’ve followed on Instagram for a number of years. This year, I bit the bullet and entered. The challenge? My (new) kitchen. Here’s the bare bones:

I love to cook and to entertain and, having lived in a small apartment for the past three years, I was so excited to finally have the space to do all of the above. So here’s the challenge: While the home is old, it was added on to in the ’90s — so while the stove used to have a wall behind it, the addition meant that, when I bought the home, the stove was in the middle of the kitchen, with no hood above it.

Another issue? That ceiling. Yikes.

I mean… not even sure what was going on there. They dropped it down and installed wooden ceiling tiles, making the room feel much smaller than it is. So the first order of business is getting rid of the ceiling, moving the stove, and deciding what to do about the countertops and cabinets.

So far, we’ve started painting the cabinets (a little bit more work left on that), painting the walls, changing out the hardware, and moving the stove but there is SO MUCH work to do. Here are the photos I’ve been turning to for inspiration:

I also want to include a few favorite pieces here, like a treasured rug, my pink Milo Baughman stools (a $35 thrift find), and a beautiful piece of art (the walls will be white so as to make the room a little lighter and brighter). Follow along, as I’ll be updating each week! And be sure to follow the others participating in the Fall 2017 One Room Challenge.